A great meme is one that prompts the receiver to share it. Memes tug on emotions in order to replicate between hosts. One of the classic memes from the anti-war movement of the 60's1 is "Make love, not war". The meme was born out of opposition to the war in Vietnam. It is a great meme because it is short, memorable, and includes to polar opposites, love and war. The meme was painted across bare chests, on posters, and printed on buttons. It is so catchy that is still circulates today.

Fast forward 50+ years to 2020 and the world looks very different than it did in the 60's. Sure, there is still war being fought around the world by America, but 2020 is unlocking the gates to a new era. The pandemic and global economic crisis are inspiring many new memeplexes. We are seeing an uptick in collectivism as well as individualism. While the state is looking to keep its seniorage and power, the individualist movement is creating memes that challenge the status quo.

Of the many memes that make up the individualist memeplex, pro-gun memes are among the strongest. Pro-gun memes not only mock the state, but with with the invention of 3D printing, the state's attempt to silence and stifle the proliferation of guns is a fools errand2. Pro-gun advocates push the position that an armed society is more free and more prosperous. 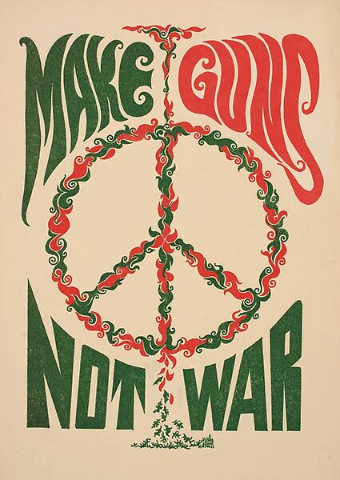 Make Guns Not War by Clancy Rodgers takes a classic anti-war meme and flips it on it's head. It evokes feelings of emotion from both collectivists and individualists alike. It's simple changing of the word "love" with "guns" gives the feeling that this isn't quite right. You expect to see love and you get guns instead. It goes against everything the state teaches us. How can making guns lead to peace? How do you make guns and not war? This is exactly what you're programmed to think, and this internal question makes it powerful.

Make Guns Not War is a mutation from the classic anti-war meme Make love not war that has a modern twist. It's a meme for the individual, advocates peace, and encourages self sovereignty through 3D printing guns.

Regardless of where you stand, the symbolism in this mutated meme is radical and it begs the question... will you propagate the meme?

How to Overthrow the Powers that be On a Low Budget I recommend you download this paper. It's an easy read and overall very quotable. It goes a little micro on some parts but overall it is a great read. This articles describes memes, memplex, how memes spread, how the memeplex gets and holds power, memeplex vulnerability, and how to subvert current memeplex. Let me first level set what you'll get out of this. You WILL walk away with an understanding of how power is derived and the power of ...
Read more...
Bitcoin Twitter Drama Timeline
September 9, 2020
Lightning Network and Email Newsletters
September 7, 2020
Notes on The Viral Aspects of Language
July 4, 2020
Notes on Memetics - A Growth Industry in US Military Operations
July 2, 2020
Military Memetics
June 26, 2020
The Memetic Meditation
June 25, 2020
Metatron's Cube
June 25, 2020
The Witches Case for Bitcoin
June 25, 2020
The Way
June 25, 2020
AI and Strong Hands
June 25, 2020
The Ritual of Seed Creation
June 25, 2020
Dropgang Protocol
June 25, 2020
The Bitcoin Diaspora, a Confederation of Tribes
March 11, 2020
Bitcoin Layers
August 8, 2019