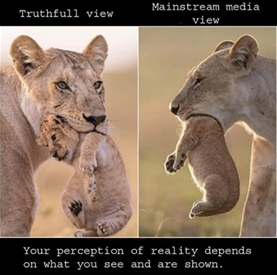 Without linking directly to the conversation, essentially the original poster said the usual thing about the mainstream media manipulating reports and presenting them in a way to warp real events. The solution presented was, of course, to "do one's own research." As you may guess, this person leans conservative and the post was made in the context of unrest regarding police brutality and racism in general.

In one way I might even say I agree regarding the media. Showing video of people looting is way more exciting than people just standing there, chanting for justice. So you will certainly get an unbalanced view of how much looting is going on if one can't balance in one's head the necessary salaciousness of a news story against the always more moderate truth of the comparatively boring real world we live in.

That said, overall, this rejection of basically everything we see on the news sounds uncomfortably close to nihilism. And since pretty much no one is an actual nihilist except maybe those anarchist agitators Soros buses in to rural neighborhoods to fuck shit up, it ends up meaning that people just rely on their gut instinct instead, which is based on even less evidence and has even fewer checks and balances than the mainstream media boogeyman that everyone loves to deride.

What the original poster described sounds more like an indictment of Facebook and similar media aggregators rather than the actual news sources themselves. Facebook, for example, relies on commenting and sharing -- "engagement" -- for their very existence. Facebook shows us things that fire us up because we will then respond and "engage" with each other, thereby spending more time on Facebook, exposing ourselves to more ads and making them more money. So Facebook will feed conservative Cuban-Americans incendiary pictures of goofballs in Che shirts stepping on the American flag not because it's news, but because it will make them mad enough to share and comment, which will get their likely like-minded friends to do the same. All the while, this makes it seem that idiots in Che shirts are a problem of any consequence whatsoever, when out of 7 billion people in the world, or 350 million in the USA, Facebook manages to show us the pictures of the two that actually exist.

The mainstream media, however, are not quite as beholden to this kind of feedback loop, though admittedly they are businesses and do need to make money to survive.

Not having the infrastructure of a large news organization full of rule-oriented nerd editors and scaredy-cat lawyers afraid of defamation lawsuits at our disposal, "doing our own research" ends up being sharing photos of questionable origin from the Facebook page of www.goTrumpUSAforAmerica.biz or whatever the equivalent liberal version is (I wouldn't know).

I'd argue that the benefit of sophisticated, well-funded mainstream media is that, while you can only see the lion eating the cub, they can send a journalist over there and snoop around and eventually snap a picture from the other angle.

And there's a cold, calculating business reason for this as well. Despite all the talk of "agendas" or whatever, journalists are always first trying to scoop each other. They LOVE to prove other journalists wrong, and if they can get the real news, they win, their paper gets more traffic for this hot item, they get more ad revenue, and so on.

I know this is not the cool thing to say because everyone loves to cry about "the media" and "politicians" or "whatever other source of all our problems (not ourselves)" such that it has no meaning anymore. But generally trustworthy, experienced, established media organizations have value, even through the truth they uncover may not comport with our beliefs. Our beliefs are just that, beliefs, and should simply change a little bit when presented with confounding evidence rather than make us all agitated.

Do not attribute to malice...

Do not attribute to malice what can be attributed to anything else. We've all heard that before. Though many of us have heard it as "... what can be attributed to stupidity," I find anything else to be more accurate and certainly better for my mental health. But as I think about it, there is more to the story. Context is critical to the application of this maxim. This saying is a way for one to interpret the world for oneself: If someone cuts you off in traffic, assume they didn't see you. ...
Read post

On applying a dollar value to life

I was reading an article a few weeks ago -- probably a few months ago at this point -- explaining to the layperson how it might be possible to compare the economic damage due to stay-at-home orders against the loss of life that could occur if people continue their daily routines. Pretty quickly the discussion comes to the fact that this disease disproportionally impacts the elderly and infirm, which then gets us thinking about how to value individual lives as opposed lifetime lived or lifetime ...
Read post