On the Virtues of Travel Photography with Only a Basic Camera

In which the photographer purposefully limits himself to minimal equipment while hunting the Aurora Borealis in Tromsø, Norway. 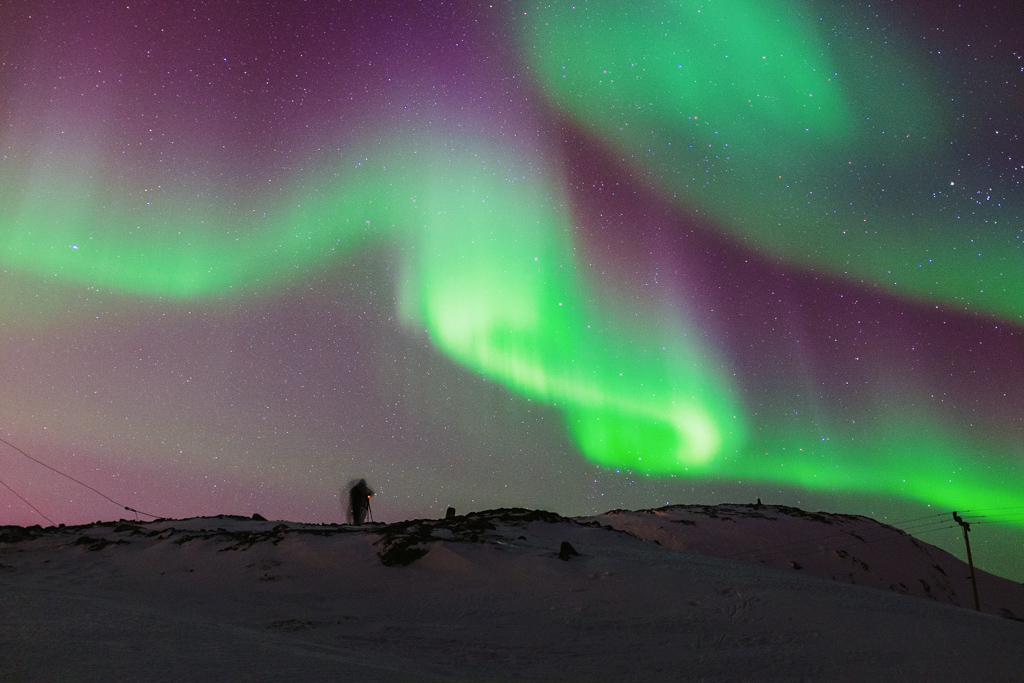 In January 2015 I took a trip to the city of Tromsø, above the Arctic Circle in Norway. It is known as an excellent place to score an Aurora sighting and caters to quite a few tourists year round. (I totally recommend it, by the way.) I had just bought myself a Fuji X100T, she and I were still in the honeymoon phase, and I was feeling a little nervous about packing too much stuff for a transatlantic trip. So I took the plunge and committed myself to just that camera and a few critical accessories like a lens brush and extra batteries. In fact, I didn't even bring a separate charger—the camera can replenish the battery internally over USB.

To be fair, as photographers go, I am a little odd to begin with. I don't have a particularly bad case of gear acquisition syndrome. As a rule I am generally suspicious of bells and whistles. And I think knobs are better than buttons and icons. That said, limiting myself to one camera—with its one built-in, fixed focal length lens—while out of the country for what could be a once-in-a-lifetime opportunity is fairly unheard of for a hobbyist photographer worth his salt.

For those of you that don't know, the X100T is a digital rangefinder (technically a viewfinder for you pedants) with a fixed focal length lens set at a moderate wide angle, more or less equivalent to a 35mm lens on a full-frame camera. At that field of view, things are pretty close to how they look in real life, while still getting a good amount of the scene in the frame. The camera relies on knobs for the core settings. Like in the good old days, if you want program auto-exposure, you turn both the aperture ring and shutter speed dial to 'A.' If you want aperture priority, you leave the shutter speed dial on 'A' and simply set the aperture to whatever you want. Shutter priority is similar.

Fujis are also known for the "look" of their images. They use a different type of sensor and do some processing behind the scenes that results in a film-like vibe in the pictures. They handle low light exceptionally elegantly. In fact, that was the biggest selling point for me. But I'll get back to image quality in a bit.

I don't like to have a lot of things dangling around, especially when I'm trying to get through airport security, so my X100T sat nicely at the top of my Boreas Bolinas pack, just under the roll top. (That bag is another piece of equipment that I would recommend, by the way, were the company still in business. It was my everyday carry, EDC as the kids call it these days, and it would come with me on transatlantic trips, with scarcely a compromise either way.) The camera is fairly compact and solid; the lens extends just a little in front of the camera so the whole thing fits in a uniform rectangular space.

So you can tell I like the size and shape. As I hinted at before, I really love the images the camera produces as well. The moderate wide angle is appropriate for just about every style of photography except, perhaps, wildlife, sports, and portraiture. The lens is reasonably sharp and the maximum aperture of f/2 is wide enough to provide some background blur if that's what you need. For typical travel photography, I think you can't beat it. Landscapes, lifestyle details, and the such are so natural with this camera. In low light, the sensor (and I suspect some behind-the-scenes processing) produce images with very low noise. And the noise that is there feels more like film grain than digital splotches.

There are, of course, problems with this camera, such as a lack of sharpness at wide apertures and close focus (ostensibly fixed in the new X100V). But as Cartier-Bresson is supposed to have said, "sharpness is a bourgeois concept." This camera is more about the feel rather than pixel-peeping. And that is what I'm really trying to talk about here—the vibe, the feel, the size, the way the camera is a part of you rather than something you have to lug around because you spent a million dollars and don't want to feel like you wasted it.

Again, I cannot reiterate enough that the simplicity and quality of the camera, both in physical form and image output, really make for the one piece of equipment this photographer needs on hand at all times.

After looking at my pictures from the trip you may disagree, but I believe that I missed hardly a single shot due to the equipment limitations. I might have liked to have used a wider angle lens for a couple of the Aurora shots, and I pretty much refuse to photograph people with anything less than a 50mm equivalent (normal) lens. But aside from that, I feel like I missed out on very little if anything.

Could it be that I am an “Artiste?”

Or am I just another whiny Peter Gibbons from Office Space? I am notably not in touch with my emotions, deep motivations, and similarly abstract parts of my mental and spiritual being, so this is an unsurprisingly difficult question for me to answer. As I try to figure out what the actual heck my deal is and why I often feel so uncomfortable in my own skin, my latest thought, which has been brewing for some time now, is that perhaps I'm simply not suited to my lifestyle of regular, daily work d...
Read post

Art is often, or usually, more than just pretty pictures

I used to wonder why someone can't just make pretty pictures and be an appreciated artist. It does happen, but it seems that more often one needs to have a body of work with clear themes. (Clarity of theme can be pretty questionable given some artsy doublespeak I’ve read rivaling in nonsense much of the corporate doublespeak I’ve been subjected to in the business world.) But anyway, these themes are often not technical like studies of composition or color, but rather they have to explore somethi...
Read post