Getting better at git once the basics are covered

One can understand the benefits of using a Version Control System (VCS) in minutes, be familiar with the main commands in a few hours, but it can take years before confidently running a command with --force.

Worse, sometimes you just don't know that a command exists, one that could save you hours!

Sometimes the surprise is even bigger as you discover not a command, but an argument of a command you use everyday. Yeah, I'm looking at you git log -S. I discovered the git pickaxe a few weeks ago, after 3+ years of using git. This gem saved me 15+ mins at its first use. Philip Potter has a great intro for the git pickaxe command in his blog post

We can break down git's learning curve in three steps: 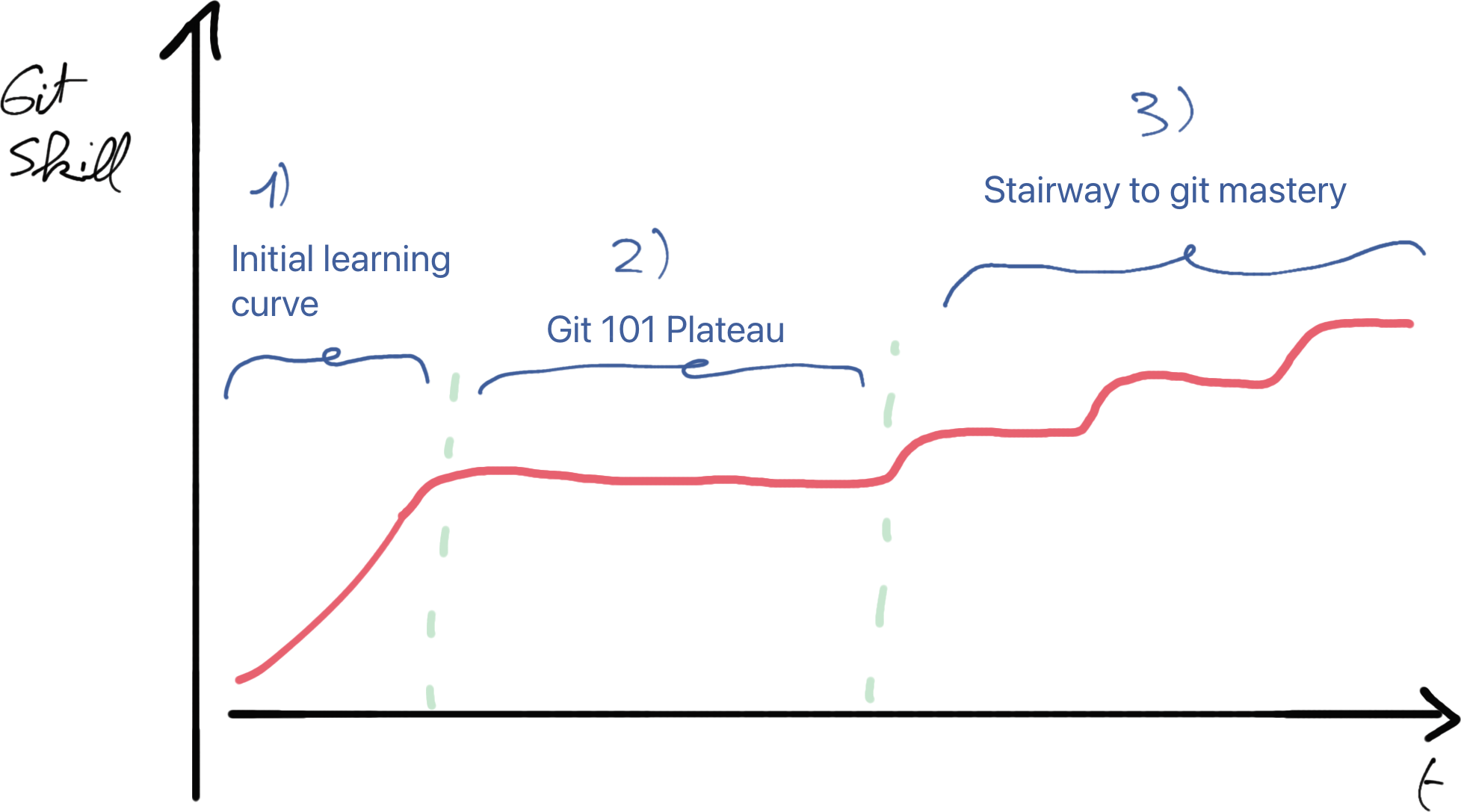 Let's break this down

Progress in git comes from the willingness to confront yourself with a repo state you'd rather avoid. The more challenging repo states you encounter, the more likely you are to understand git internals.

How to encounter bumps more often?

Problem: when you're working on a feature and must ship asap, you are not incentivized to learn all the internals of how git works when a corrupted repo state arises. You're more interested in solving the issue at hand.

So we go to Stack Overflow, copy/paste the most relevant one liner, and give a +1 to its author. Problem solved. Or is it? Next time a similar bump arise we're likely to go for that one-liner copy/paste once again. We can do better.

Also, I found that the Atlassian doc on advanced git usage is amazingly well written and easy to digest. It's not exhaustive but it does a better job at conveying the intuition behind a command compared to the official git doc IMO.

At each corrupted repo state or complex branching, rebasing, etc. operation you encounter: give it a solid 10 mins of thinking and make sure you leave the situation with a clear understanding of what the problem was, how you solved it and how you'd solve it if it appeared again.

You can take notes of it, blog about it, or answer a related SO questions to help you commit to this learning ritual.

"Allow the civilized man time to gather all his machines around him, there can be no doubt that he easily overcomes the savage man; but if you want to see an even more unequal fight, put them naked and disarmed vis-à-vis each other, and you will soon recognize what is the advantage of having all your strength constantly at your disposal, to be always ready for any event, and to carry oneself, so to speak, always completely with oneself. "

For mundane tasks, the IDE enhanced approach can help you gain time. But be wary that when things get complicated, like in case of merge conflicts or for investigating the root cause of a bug, using the git CLI will be a powerful tool.

As scary as they look at first, it's by taking the time to decipher new git commands you encounter that you become more proficient with the tool.

As an illustration, let's say I'd like to see the commits I made over the past two days on a repo: I'd type glola --since="two days".

The OhMyzsh framework has a git plugin with tons of aliases. I just use a subset of them but it's already a huge gain in time. Here is a list of useful git aliases.

Lost in the spectral domain Starting my journey with deep learning for audio processing As I'm getting into machine learning applied to audio signals, I realize that there's very few ressources available to craft yourself a curriculum. On the other hand, googling for deep learning applied to image processing or NLP will return more results than you can use. Of course more content, blog posts, GitHub repos, online courses, etc. will be available over time. But still, how do you get started in ...
Read post

Finding guests for your podcast

I host the Post Mortem podcast where software engineers come to the show and reflect on a challenging project or incident. Since each episode is a 2 way interview, I need to find a new guest every month. Here's the flow I've refined over the past 6 months to ease this booking process: Identify potential guests - be curious & prioritize Reach out - a few rules of engagement Follow up - some bookings take more time than others. Now, let's break down each step. 1.Finding potential guest...
Read post