I sauntered into my dwelling, placing the riches of my conquest in my ever-growing pile. I determined the temperature by the taste in the air. “It is cold,” I announced with grandeur. I stoked the gold-gilded fireplace, and prepared for a night of frigid temperatures.

I curled around my massive ruby, my greatest treasure. It was my curse. It was my salvation. I roared mightily.

A puny human approached my lair. It was not worthy; a mere knight. It did not deserve to be slain by my might. I sent it away with a flick of my claw.

Something else moved in the white-blanketed woods. It was not a knight.

I looked down upon it. Who dared approach me?

A commonfolk, I determined, a mere peasant - and what was more, a child. Somehow, it appeared completely unaware of my majestic presence.

It must wish to steal my treasure, to become as mighty as I. I growled threateningly.

It jumped a little and glanced around, but did not appear to have pinpointed the source of the sounds. It began to walk faster.

I shifted in the shadows of my lair, emerging into the light. I was a grand sight to behold. I growled louder.

Now, the child definitely knew what and where I was. It backed away for a few steps, but not far - it kept moving, not towards or away from me, but around me.

I would not allow it to steal my treasure! But I was merciful in my majesty. I blocked its way with a massive talon.

It should not smile. I would not be merciful for long.

It stroked my talon just a bit, its eyes wide. I recoiled at the touch, then roared with all my night. Why would it not leave?

Even now, it did not run, but backed away slowly, watching me with eager eyes. It had, admittedly, made no move to steal my treasure as of yet. Still, as any reasonable creature would, I curled protectively around my pile without taking my eyes off the human.

It had stopped moving. I snorted a short burst of flame, just to encourage it to keep going, far away from here.

It flinched, but did not run.

I cocked my head slightly. The child was brave. I leaned closer and sniffed it.

Very slowly, it reached over and patted the top of my nose. I jerked back slightly, then moved closer again, intrigued.

This seemed to please it immensely. “Yesss,” it whispered, rather unsettlingly, just barely touching my snout again.

I shook my great head. Why had I allowed it into my lair?

But it was merely watching me in fascination. Every other human had failed to get anywhere near me, and yet here it was, in my lair, touching my snout. It was not harmless, as a creature; its eyes had a wild sort of look. But it did not seem to want to hurt me... yet.

I narrowed my eyes. It made no further move. I drew closer.

“Good,” it whispered, staring into my magnificent yellow eyes. “You’re a good dragon.”

What hold had the morals of the world upon my might? Yet something in the human’s voice made me think its words to be true. It pleased me.

It smiled and took a few careful steps past my face, inward towards the center of my lair. It kept its eyes on mine.

I cocked my head, and growled questionably. Who was this child? What did it want?

“No?” It stepped back towards my head, looking nervous.

I sniffed it again. It had posed no threat to my precious hoard as of yet. I hesitantly moved my claw and let it pass.

It ran its hand along the length of my belly, moving towards the center of the room. It sat atop a pile of gold with no care for it, positioning itself so that I was now curled around it.

Why did it care not for riches? Surely my hoard was the most precious thing there was. But perhaps this child was no common shepherd after all, and knew some greater treasure?

It sat silently and happily for a long time, stroking my rough hide. This, sitting in the center, was its victory.

But finally, it pulled itself to its feet and approached my head once more. “I must return home now...” Its eyes lit up. “But, I’ll be back tomorrow, with a gift!”

Part of me wondered what more I could be given, but this child was clearly full of surprises. I growled my acknowledgement.

The child nodded and hopped to its feet, waving vigorously back at me as it leapt into the woods. A friend, perhaps. An odd sort of friend. 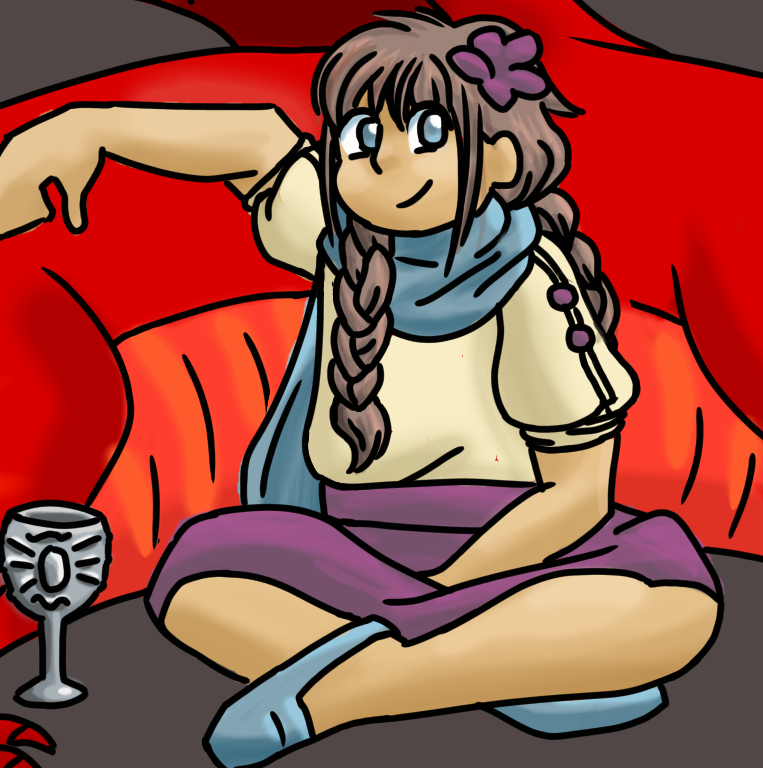 More from More Than Gold

@hiroshi on Sketchers United drew our wonderful human girl. Thank you so much!! Your art is so fantastic! ...
Read more...