Just a humble storyteller making his way through the galaxy.

Welcome to NerdyPete.net! Welcome to my Nerdery! My name is Nerdy Pete.

TL;DR: I'm a huge nerd! Are you a nerd, too, or thinking that maybe you are one? Well subscribe now and I will help encourage and inspire you to be the nerdy nerd you're nerding to nerd! NERD IT, NERD!
Read on to get the details:OK, so "Nerdy Pete" isn't my birth name, obviously.  My "real" name is Pete Nicholls. I have been a nerd for as long as I can remember--WAY before it was cool.  I think my earliest memory of being a nerd was when I was 5 or 6? I went to a supermarket opening in my tiny little suburban town about an hour north of NYC.  I don't remember if the reason I was there was to commit an act of nerdery, but in the end, that's what I did.  Witness: 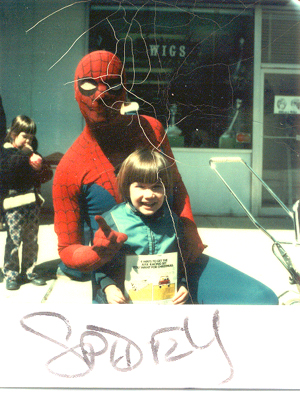 That's an AUTOGRAPHED POLAROID, BABY!!
To this day, Spider-Man is still my favorite superhero.  How many people my age still have a favorite superhero? (All of us should, for Stan's sake!*)   I have something like 15 Spider-Man shirts, I think.  I also cosplay as an alternate reality version of Spidey from time to time. The other major fandom I still take regular part in entered my brain not much later... Just before a particular movie came out in 1977, my dad (who was as professional a nerd as anyone could be in those days) put a Star Wars movie poster on the wall in our living room and because of that, I would go onto be a Star Wars fan for most of my life.

My wife and I on Batuu in the Earth year 2019. It was before the dark times......before the Pandemic... (Yes, that is my Google Glass. Yes, it still works.)
But science fiction isn't my only brand of nerdery.  My dad was an electrical engineer before he retired, and my mom was interested in computers back in the late 1960s/early 70s (before that was cool, too) and my step-dad worked in telecommunications but was kind of a prototype for what we'd call a maker these days. All three of them inspired me to be creatively curious about how things worked.  At a young age I started learning about electronics and electricity and later devices like Walkmans, and CD players and TVs, and all the other technology of the day. 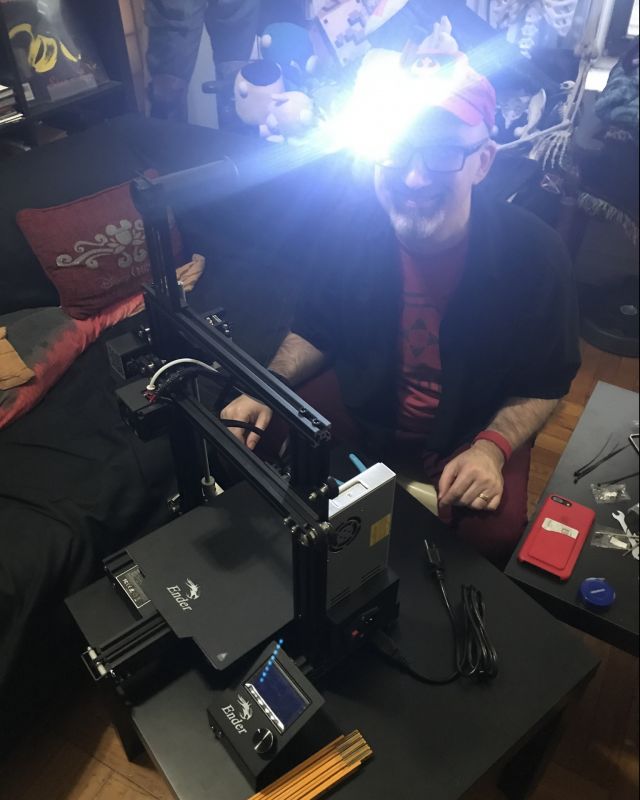 Me with my newly constructed Ender-3 Pro3D printer, back in the early days of the pandemic!📸: Sierra Rein (my wife, who is a full-fledgednerd in herself!)
After many decades of being me, I've come to realize that my obsession with tech STEMs** from the fact that technology is where science fiction becomes reality.  With Arduino becoming available in the first decade of the 21st century and the Raspberry Pi joining it ten years later, it seemed like the whole maker world exploded with activity--and allowed anyone to make their own affordable cool tech!  I own a couple of Arduinos and a whole stack of different Raspberry Pi computers.  I've made my own media server, camera, a couple smart speakers, e-ink name tag (which can display the weather) and I've started many more projects that I am slowly working on.  I also own a lot of tech that I didn't build myself.  But that is for another post!Some other things I am a nerd for: MST3K, Red Dwarf, The Twilight Zone, Japan, puppetry, Lego. 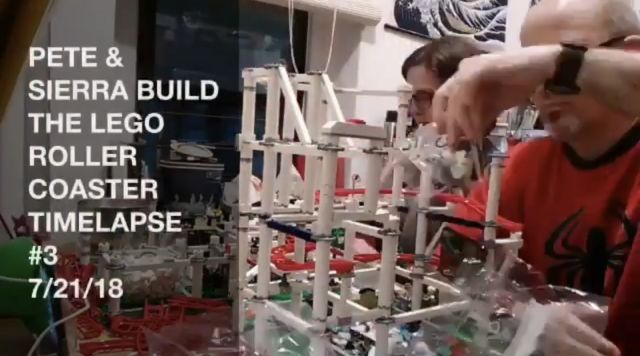 Screenshot from a time-lapse video of my wife and I building our Lego Roller Coaster!Hit that "Lego" link above to see all of our LRC media on Instagram!
The gist is this:I want to share all of my nerdery--sci-fi, tech, and other things I am passionate about.  I feel like there are plenty of people who are almost like me (nerdy, out and proud) but need a little inspiration or encouragement to take that step to embrace their own passions.If you enjoy nerdery yourself, please follow along!  And be sure to let me know what kind of nerdery YOU are into!  It doesn't even have to be sci-fi or tech.  Being a nerd simply means you have a seriously enthusiastic passion for something.  I'd love to know how you are a nerd. Reach out on my contact page or find me on Twitter.I'm also a writer and cartoonist.  You can read, listen to and watch some of the things I've made at Pete.ink!My plan is to post weekly-ish on Nerdy Thursdays with the latest nerdery I am up to. For now it'll be text and photos, but I hope to do some videos, too. I plan on keeping each text post about as long as what you are reading now or shorter (not including photos).Any spreading-of-the-word would be awesome, too. My secret hope is to connect with other nerds and create a kind of nerdy network of nerds. The important thing is that we let each other know that we exist. ANYWAY! That is my pitch! Hope you are having a nerdy day! Thanks for reading all this way down!-Nerdy Pete
Very good friend of Casual Spidey

"Stay casual!"* Stan = Stan Lieber = Stan "The Man" Lee = the reason "Marvel Comics" is a household name**Did you see what I did there? (STEM = Science Technology Engineering and Math)
tinyletter