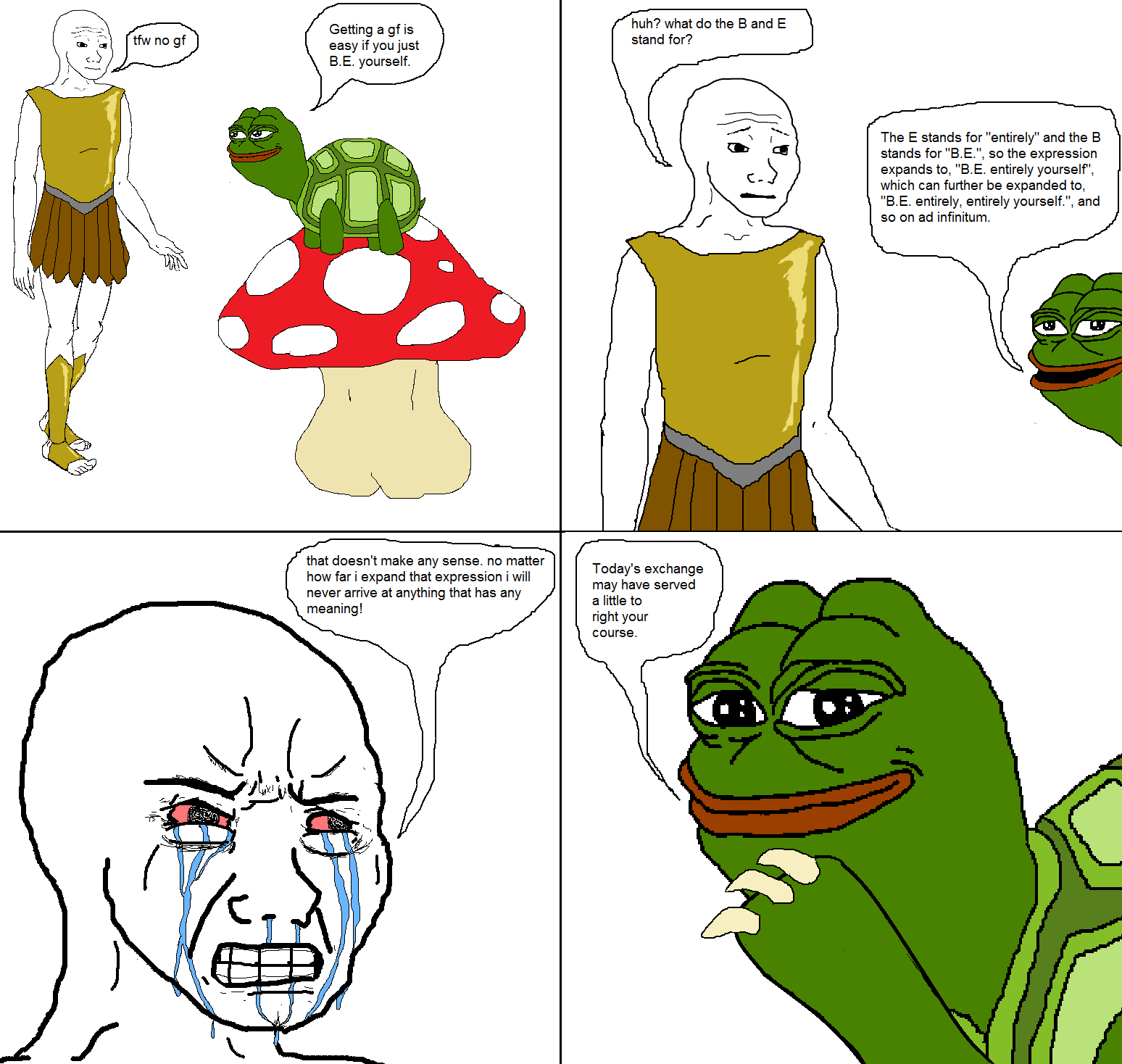 The sad man is confused, how could the infinite repetition of such an expression arrive at a meaning? In Lacanian theory, the sad man is distressed at the recognition that the phrase produces a chain of signification which does not terminate. Of course, what is that which terminates the signifying chain, if not the master signifier itself? As those familiar with my book, "The Sublime Object of Ideology", will know, the master signifier is the basic self-referential signifier on which ideology rests. The sad man is responding with frustration and confusion because the wise turtle fails to speak from the expected position of the master, and provide him with a basic signifier on which to validate his ideological stance.

What I did not mention is that this sad man is an image from the alt-right reactionary movement called the "Incels", a movement which my Incel friend Michael Crumplar so kindly informed me about. The sad man stands in metonymically for the structure of beliefs behind this Incel movement; the Incel Subject viewing the image identifies with him. In Lacanian parlance, the wise turtle represents the big Other, who frustrates the desire of the everyman Incel, and this is why the sad man is sad.

But we cannot stop here. If we want to understand the meaning of the wise turtle, we must view his position, to be entirely entirely entirely yourself and so on, from a Hegelian standpoint. An important step taken by Hegel was his reliance on the ancient philosopher Heraclitus--flux, change, everything is fire, and so forth--to challenge Kant's quasi-Platonist, static conception of the Idea. For Hegel, the Idea lives, is animated, moves in a perpetual flow, transcending itself in a process continuing for eternity. Thus we see can the entirely entirely entirely entirely as a means for, how shall I say it, nudging the sad man away from this static conception of "oh, if only I do such and such, x y and z then I can get a girlfriend", and toward perpetual self-overcoming, the Hegelian aufheben, at each step of the "entirely".

The wise turtle's wisdom is in saying "do not worry so much about the girlfriend, focus on improving yourself", but without so much saying it, as providing the potential or grounds for such knowledge in the Subject through paradox. This is akin to the function of the analyst in what Lacan calls "the analyst's discourse", who, in speaking from the position of the analysand's "objet petit a", is able to produce the master signifier of the analysand, revealing his ideology to himself, and offering the potential for overcoming. Of course, you can't walk up to someone and say "oh, you are an ideologue, this is what you believe, you should believe something different" and so on. The production of the Subject's master signifier must be approached from this circuitous route, where the analysand himself does the work of uncovering it for his own knowledge. The paradox is an effective form for this.

So this sad man, the Incel, is asked by the wise analyst turtle to understand the constitution of his own belief in, I don't know, whatever Incels believe. And it is through this that he may be able to free himself from his neurotic fantasy, go watch movies, take a walk, and so on. One day he might meet a girl, they have a coffee, and fall in love. It is in this way that the image, which surely came from within the Incel movement, also demonstrates a radical, reflexive critique of the movement itself.

A friend writes: Do you have any theory as to why I am so prone to self-punishment? Like the other day I accidentally slept later than I wanted to and I beat myself up and had zero sympathy for myself. I am emotionally punitive with myself with lots of rules about when work will happen and how it will happen. The following was my reply: I can't tell you exactly what's happening in your case but I can give you a few ideas or tools that will help you figure it out on your own. The key idea: ...
Read post

The following was written in response to a comment on Reddit: A lot of Freud's ideas turned out to not be empirically validated. So we should ignore them. [??] To understand what's going on here, we need to think a little more about knowledge, with an understanding that the goal of Science is to produce knowledge. Contemporary Institutional Science, especially within academia, privileges the detached observer, in the sense that the method is only seen as valid if we follow the model of "arb...
Read post