The God of Notes

The last thing I need is another note-taking app. I've had it with them. How many more do we need? I, for sure, never seem to have enough of them. So, herea are some of my useful notes about various note-taking/writing software I have discovered, tried, and am yet to take on.

Firstly, Joplin. Can it really be as great as it looks? I don't know, but I'm downloading, and not in the least because it seems too good to be true. I guess we'll wait and see.

One I've used on and off—mainly off because I can't be asked to sort out some sort of a manual syncing solution for it, but sometimes on because it is so pleasing to the eye is the lovely Typora. So nice. So! Very. Oh, I just scrolled down the website and noticed it has a heap of features I didn't realise it had: images, diagrams, inline styles (whatever that is, but I'm sure it's not too hard to find out). Word count, line count, character count . . . There's much to enjoy. All I need to do is sort out some sort of sync, make sure I save stuff in some consistent location, and work out what I will be using it for. There's no mobile app, but they are just .md files, so pretty much any markdown editor should do it (I think!). I wanted to upload a picture—I took some pretty screenshots—but something seems to have happened to Flickr. Nothing is uploading. So maybe next time. 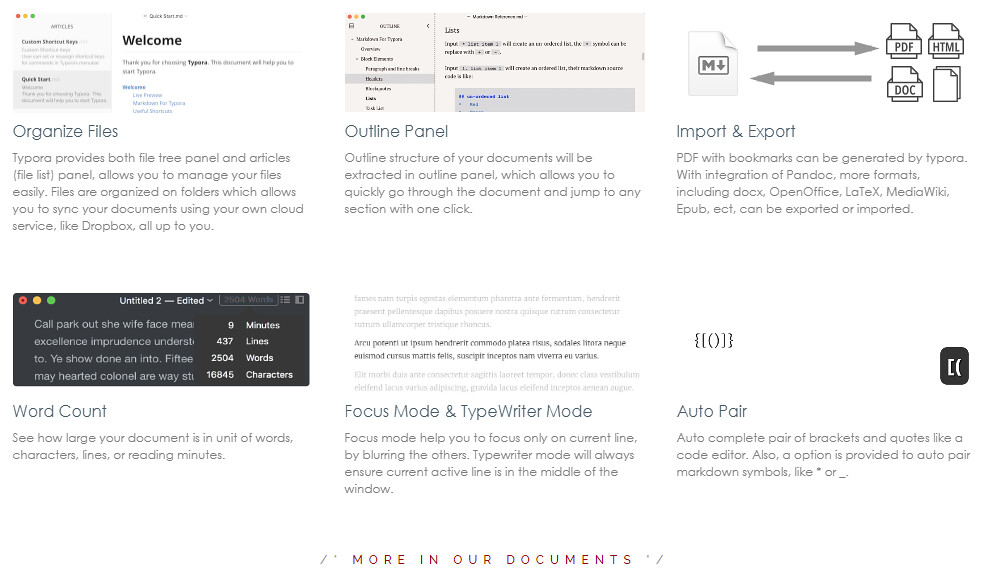 NoteRiot looks great—and they have a mobile app, which also looks great. I will definitely give it a go.

Draft is also worth checking. It really is a nifty little app.

If like me, you take a lot of notes on paper, Notebloc may be a useful thingy to have on your phone.

And finally, the gem and the diamond of them all: Notion. That thing is unbelievable:

Off the top of my head, I use it for:

The list is not exhaustive and doesn't begin to cover what Notion can do, but at the same time, it's so simple and intuitive I could use it with half the brain, and I am not even that clever. Notion is like Standard Notes on steroids. It is one of those bare basics apps, just like Standard Notes, but it's so much more because you can present databases as views and create links between them. It is like Microsoft Access would be if it was made by Standard Notes. I don't believe it's open source, but it must be close enough because I can't live without Notion.

Apart from the upload file size limit, I believe free acounts have full functionality and will provide an average Joe with ple-e-enty of space to last a year (and possibly more), but me—I've not been so lucky. As you probably guessed from the use case detailed above, I ran out in days. So what? Notion is only $8 p/m (or something negligible on those lines) per user, and I've been using it for a couple of months for several users and not had to pay a penny yet because they give you credit for referrals, trying out new features, and even for upgrading to a new version, it seems.

It works amazingly on a mobile. It is fast in a browser. The Windows app is dapper. The development is a lot. The support team couldn't be more responsive. And the interface looks really, really good. Notion, my friends, is truly the God of Notes.

Notion is truly the God of Notes.
~ Me

I may use Evernote, but I'll never love it. Even though each time it comes up in a conversation, someone swears by it, I only seem to swear at it. Apart from how prettily it syncs with Blinkist (which I happen to enjoy a lot), I don't get it, and I don't get people who get it. I know you can use it to keep all sorts of stuff, but so you can with lots and lots of apps which are so much better than Evernote. I've just about had it with its little annoyances, with its buggy, twitchy, clunky apps—and that's from a company that's pretty much a household name—and in 2019! And I don't even want to see Evernote privacy policy. So, either today's user is not too fussy or he is too lazy to look around for better stuff, but most probably both, and I don't get how a popular app gets away with being quite so bad. Seriously, guys. Hire a developer or something. Good, excellent, and spectacular software is popping everywhere, and I think the only people who see something in Evernote if are those who haven't seen any of the goodies out there.

I'll soon be checking some more intersting decentralised apps on State of the Dapps—that one, it looks most interesting of them all. I just need more time to look at all these goodies. About 60 hours in a day should do it.