I've only fairly recently become aware of the work of Cuban-American artist and printmaker Emilio Sánchez through the stamps the USPS put out last year. But I'm all-in. If you know my work, you'll know why.

And that's where I want to go with this.

My mother was a big fan of Georgia O'Keefe—to the extent that she painted a replica of one of her skull paintings on a homemade cabinet—and while researching this post I was reminded that, as a child, my favorite works of hers were the New York City stuff, like this. I guess I appreciated the graphic nature. Shapes.

I also liked Edward Hopper, again for pretty obvious reasons if you know me. You know, the aching loneliness of negative space and flat, graphic compositions. Fun stuff like that.

I wasn't really paying enough attention at the time to know if O'Keefe and Hopper influenced my work, or if I only noticed the connections later. What work, you ask? Are you just trying to get me to talk about myself? Because I will gladly do so!

(Re-read those last two sentences in a deep Kiwi voice and they might ring a bell.)

My very first pictures outside of high school photography class were just a bunch of flowers. But once I developed a style, many of them became studies of divisions of the two-dimensional frame, often leaning heavily on negative space as, somehow, a source of interest. Check out how oddly fascinating that big blank area in the left half is:

Or is it just me?

We also have lonely, contrasty, suggestively beckoning stairs akin to "The Upstairs" by Charles Sheeler. (That's another guy I learned about recently but that should have been a long-time inspiration, and will be now.) 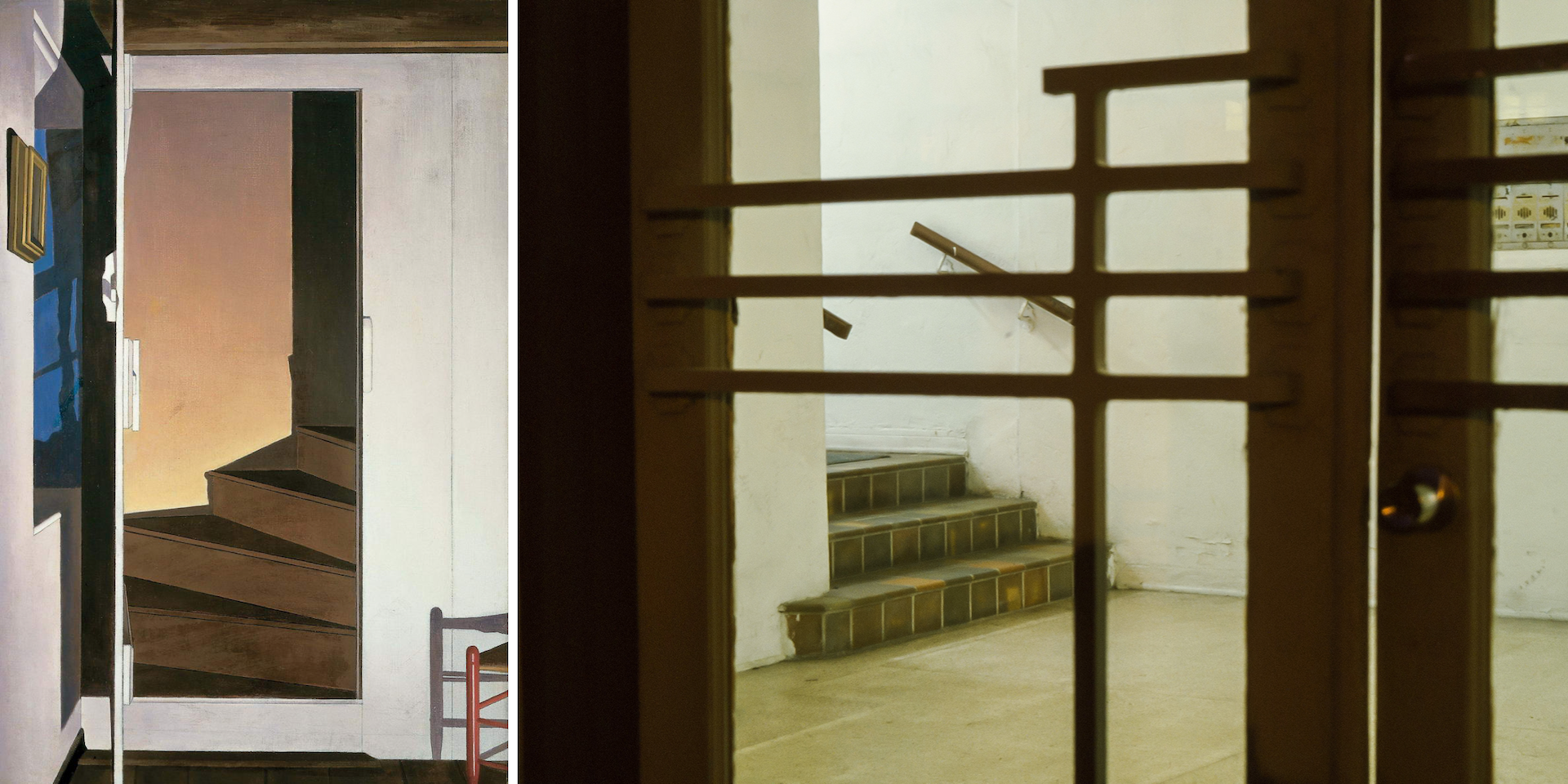 Being born and raised in South Florida, along with several generations of my family, and being somewhat sentimental and romantic, I've grown attuned to the particular nature of the light and the sky here. When a movie is filmed here—and similarly when it's supposed to have been filmed here but wasn't—I always notice. I figure the climate leads to certain types of clouds and foliage while the latitude gives the light a certain angle. We have very distinctive light and clouds, and I love it and get all excited when the seasons change and we get a new angle and color and timbre of light. I try to capture that feeling for everyone else. But, alas, I imagine that feeling is lost on most, since how many sentimental fourth-generation Floridian would-be artists and photographers are there?

Not all my pictures were flat. But just about all tried to harness our particular qualities of light. Take this Kodachrome shot off my back steps at the time: 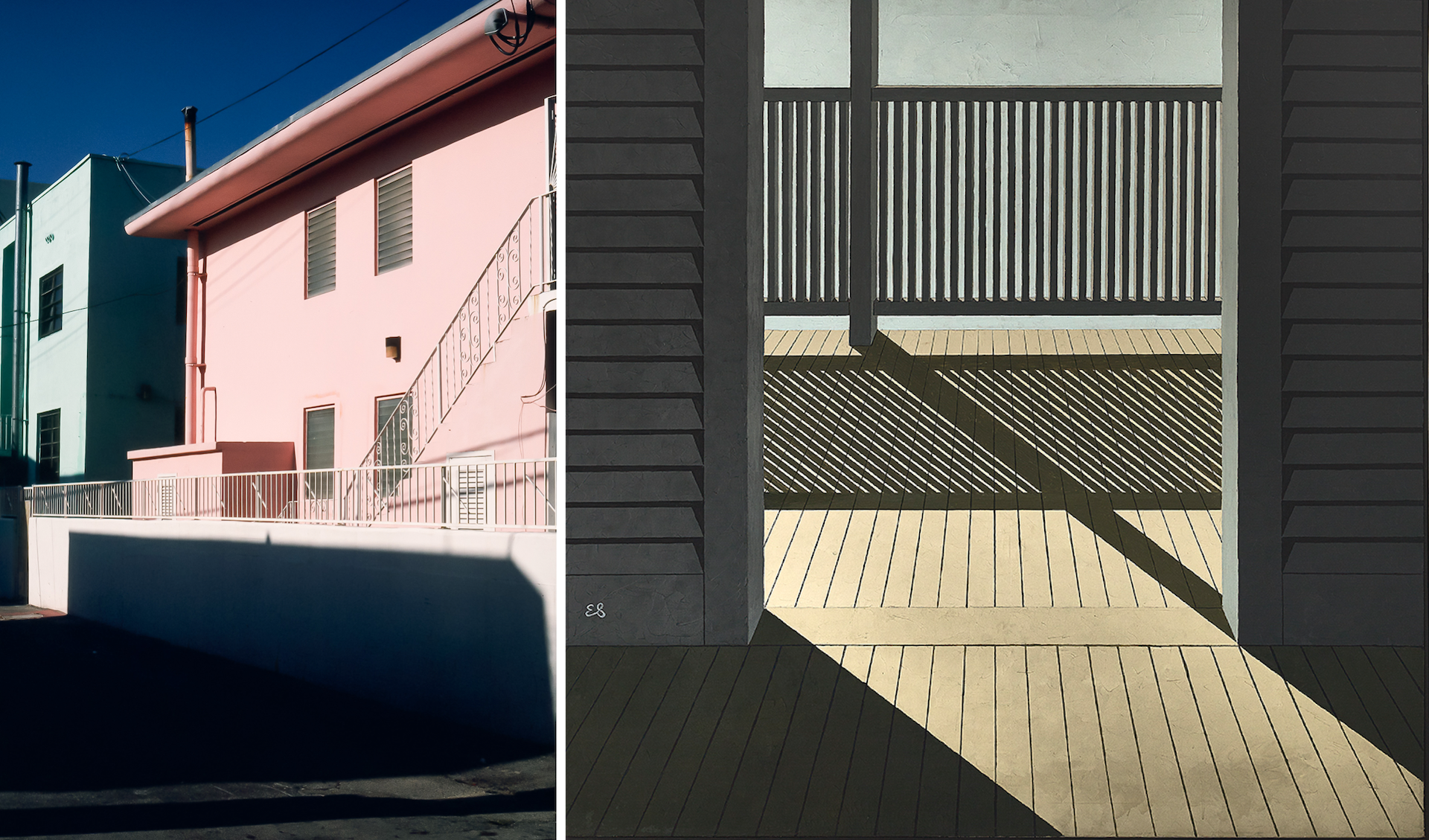 So, it turns out that our climate here in Miami is, as you would expect, similar to that of Cuba. We have bright light with harsh, graphic shadows which make for excellent design elements. From what I've read so far, this informed the work of my new favorite artist Emilio Sánchez. And I can say I imprinted on those shadows, too, as I developed my eye.

Some things I've seen written about Emilio Sánchez can be copied and pasted straight into my artist's statement. Carol Damian of FIU and the Frost Art Museum called his work "not a picture of something, but the application of pigment [or pixels] onto a flat surface to become a singular object to its own definition." I've tried to say the same of my own photographs, but substantially less eloquently.

In more recent times I've been drawn to our skies, incorporating bold graphic elements of bleak architecture with the drama of distant exploding cumulonimbus.

Our friend Emilio Sánchez has some of these, too, but without the bleakness.

Now, what I need to do is find the photographers in this style for some more inspiration (and, to be honest, some ego massage). Do any of my readers know of any? And perhaps my first question should be, "Do I even have any readers?"

Here's why I think NFTs won't last more than maybe fifteen years. NFTs use the all-the-rage blockchain concept as a way of ensuring scarcity in a digital world. Just like how one bitcoin belongs to one person, even if you copy the code to your own flash drive and carry it around with you, one digital—or digitized—work of art belongs to one person, even if you download it and make it the wallpaper on your Dell Inspiron at work. But all this really presupposes that scarcity truly is what makes a...
Read post

Where is Keynes's three-day workweek?

Famous economist the Right Honourable John Maynard Keynes predicted that we would all be working three days a week by now. He did not predict the top-turd-in-the-toilet mentality that the human mind finds so effortlessly natural and which causes many of us to race, or push, our fellow humans to the bottom in an attempt to win some employer's fleeting favor. Some day I'll write up a whole thing on my theories on why this is. And hopefully someone will tell me where this has already been studied...
Read post