The Indent Editor is a relatively recent (initial commit Jan 2020) and easily installed editor for Standard Notes. Think of it as another plain text editor upgraded with sensible indentation and prefix behaviour:

Just a few functional features, but they make creating / editing notes with nested lists much more convenient, and well worth investigating. But wait ... that's not all ... while the Indent Editor is by no means a markdown editor, it does offer a few stylistic niceties up its sleeve:

I do most of my writing utilizing markdown markup, and have actually tried out most of the markdown editors available for Standard Notes. In the end, I uninstalled all of them in preference for the Indent Editor (actually, a version I tweaked slightly for heading colors). When I want to write longer form, or edit my SN notes with a markdown editor, I use the standardnotes-fs tool to have my SN notes repository mounted on my drive and just open that directory with Typora (edits are synced back to the server). But for a fast, useable, note editor, the Indent-Editor gets my vote ... and here is my tweaked version editing this note: 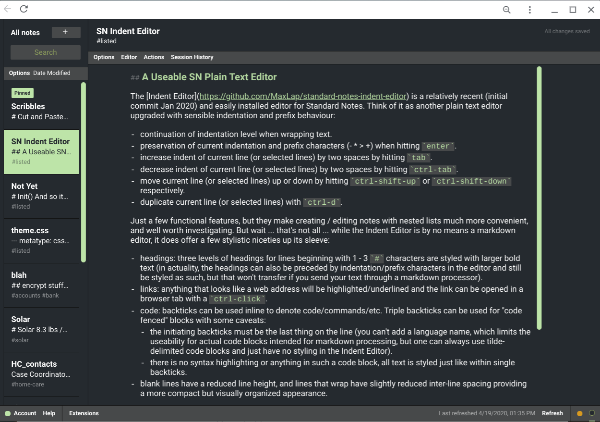 Init() And so it begins ... At this point I can't predict the frequency or content of the writings/musings that might appear here. Perhaps mini-reviews of a few of the free tools/themes/extensions I've come across for StandardNotes. Perhaps a philosophical rambling or two. A spot of code here and there. At any rate, something may prove useful or interesting or amusing to someone ... we shall see. puts "Hello Listed" __END__ ...
Read more...

Because a person can only binge-watch The Expanse, all the Stargate shows, DS9, and the BSG remake so many times during any given pandemic, I've also been doing some minor tweaks on a fork of Maxime Lapointe's Indent Editor for Standard Notes. The tweaks thus far: Markdown (atx-style) headings get a bit of color utilizing the --sn-stylekit-info-color of the current theme (I've only tested this with the Slate Theme and the Gruvbox Dark Theme). Blank lines adjusted up from the 0.4em of the Inde...
Read more...
Pen & Paper: Black Forest
June 26, 2020
New Pi 4
May 27, 2020