How does a Heathen Worship?

Heathenry is orthopraxic, not orthodoxic, meaning that this religion is based on praxis or practices rather than specific accepted creed. In the days of pre-Christian Europe, the hearth was the center of the home. From its flames came food, warmth, and a central meeting point for the family and the broader community. The vast majority of religious worship took place around a fire, for flames were the means of transmuting offerings to the gods. Blood, animals, meats, alcohol, and baked goods were burned and sacrificed to earn the favor of the gods. While offerings are not recorded as happening in the home, we can see the hearth as an analogous structure of holy flames, and some heathens have reconstructed a purpose for the home fire that we call hearth cult. 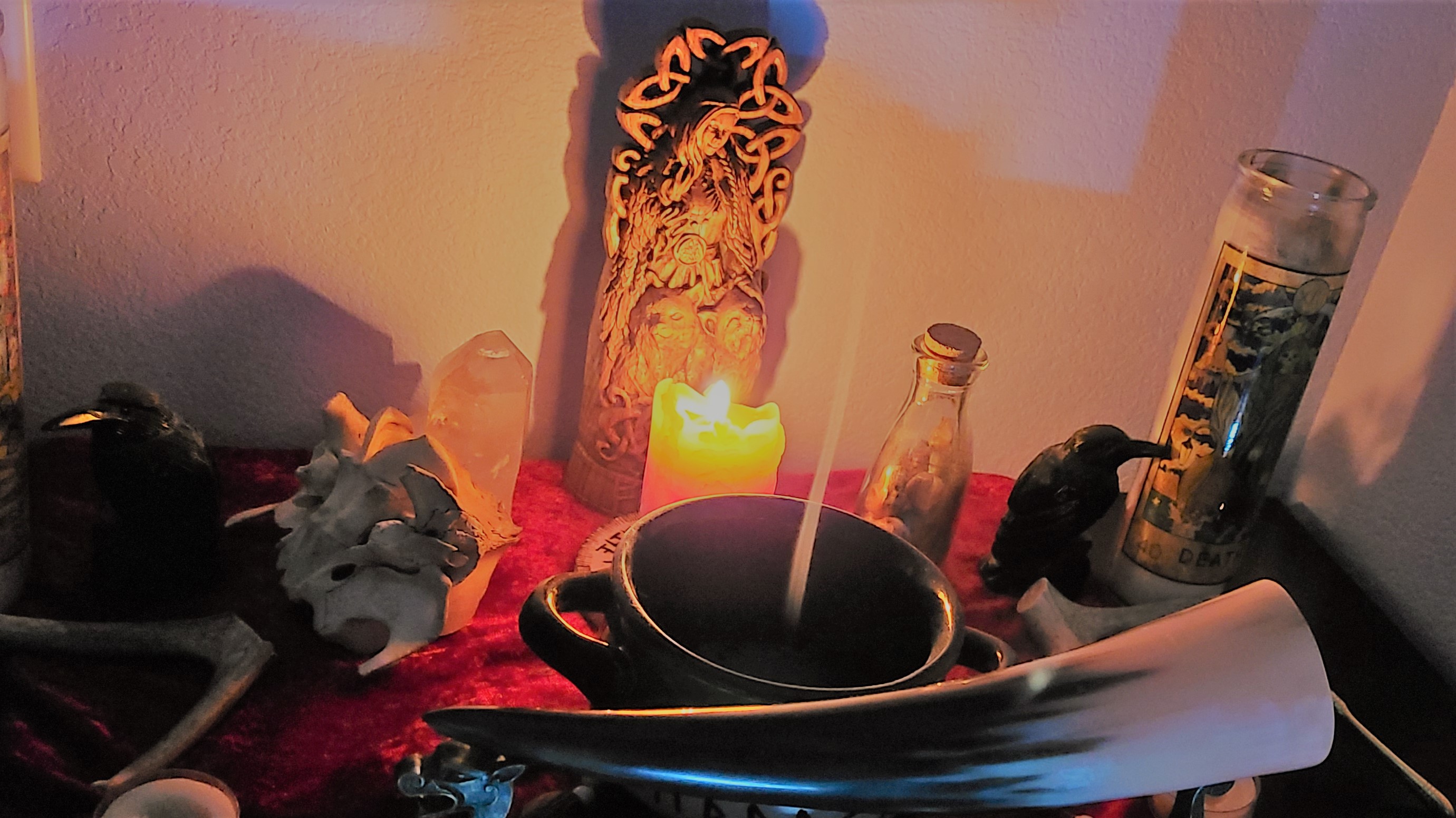 A photo of my altar after spring cleaning.

The barest bones of a good home altar for heathens are composed of two major components:

Beyond that, the altar can be decorated to the tastes of the individual. Maybe this means idols or images of gods, photos or tokens of their ancestors, bones and pelts of animals for the landvættir...Add as much as you like, or keep as it minimal as you like.

The Flame. Obviously, a fireplace or mantle would be the closest thing to an old-fashioned hearth, but many heathens either don't have space to worship there or don't even have proper fireplaces. Most often, the hearth fire is symbolized on a shrine by way of candlelight. For dorm-bound or high-hazard heathen homes, even electric candles can do the part of symbolizing the holy fire.

The Offering Bowl. In lieu of burning an offering directly, most heathens opt for the indoor-safe practice of relinquishing gifts in a bowl or cup near the flame. Perhaps a chalice for drink and a bowl for food.

I'd like to acknowledge a bit of an elephant in the room when talking about pagan rituals. The words we use -- offering, sacrifice, and the like -- tend to evoke negative images of someone slaughtering an animal on a stone altar, bathing in blood, and burning its body. Living in the modern age means we realize not everyone can shake a whole sacrificial cow once a week for worship!
...I'm just joking, obviously. Many heathens take issue with animal sacrifice. Only when someone is informed on best practices and is prepared for all parts of the death does a heathen kill for the sake of offering. It is uncommon, even then. Heathen offerings nowadays often include water, grains, salt, cooked food, incense, and herbs. Personally, I prefer herbal offerings because they can be disposed of safely in nature.

This is the groundwork for heathen worship at home. In my next post I'll walk through the steps of my usual rituals. So far, my intro posts have been generalized on purpose, but now that I have the basics out there I'll begin explaining my own praxis.

Several heathens have tasked themselves with defining our religion, my favorite of which is the brilliant mind behind the Longship. Blogs from individual, established heathens are incredibly helpful to new heathens. It's a snapshot of someone's life, a personalized toolset to help them uncover the groundwork for their own reconstructionist faith. My goal here is not to explain myself to other heathens, however; this is to help non-heathens and even non-pagans understand what people like me belie...
Read more...

In this entry we'll be walking through the steps I take to give offerings to the gods, the vættir, and the ancestors. This is personal to me, and many heathens have their own takes on ritual practices in their own hearth cult. Prologue: The Groundwork The first thing to lay out is when and why to perform an offering. To maintain a healthy and cyclical relationship with the entities you give to, there should be some semblance of consistency. There is no real historic precedent for what days yo...
Read more...
Loving the Landvættir
October 13, 2020
Community in Heathenry
July 3, 2020