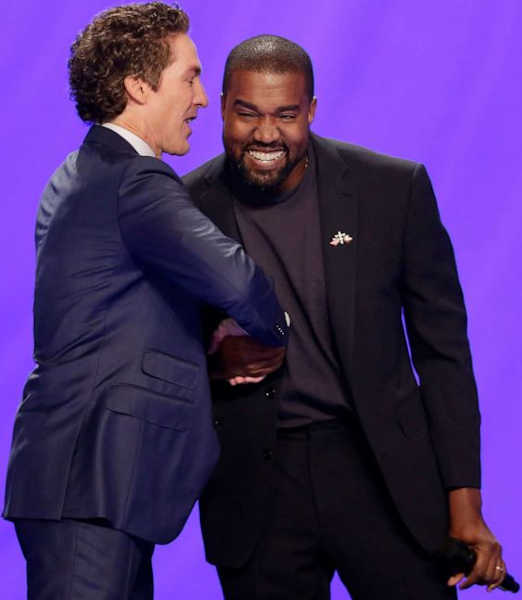 So Kanye West wants to be a preacher, me too. I have no problem with that. I consider myself to be a spiritual person as well and although I don't consider myself to be a Christian like Kanye or Mr. Olsteen, that is also in the picture above, I believe in universal truth and that all religions of the world have that. If you need an example, look no further than the "Golden Rule".

Having said all that, I do have a bone to pick with Mr. West. According to Complex, while having his "sunday preaching" with the Mr. Olsteen, he made some comments that didn't sit right with me, here it is in the block quote:

No, that's all wrong. Sex trafficking is the recruitment, harboring, transportation, provision, obtaining, patronizing, or soliciting of a person for the purposes of a commercial sex act, in which the commercial sex act is induced by force, fraud, or coercion, or in which the person induced to perform such an act has not attained 18 years of age (22 USC § 7102).

To put simply, strip clubs are not that. Firstly, you have to be over the age of 18 to work in a strip club. Second, "most" women, and yes I said most, we will get back to that in a moment, choose under their own volition to work in these type of establishments. Some are even happy doing it, I personally know a handful of women who claim stripping is way better than most jobs like being a waitress or bartender.

Okay, I said "most" with quotations, why? Well, there are some women who are forced into doing things they don't want to do by their boyfriends, pimp, and yes, disgustingly by their own family members. I actually met a woman who told she was made to strip because her mother made her do it to get easy money, what a world we live in. All of this is called "Sex Trafficking". THIS IS ILLEGAL.

The strip club, being a legal establishment, who gives the opportunity to strip under their own volition IS NOT ILLEGAL. In fact, I would say it's a noble profession what they do and I thank them for doing just that. Yes, I love strip clubs and I met allot of women there who love their job and Kanye should know the difference.

It bothers me he says these things because he has celebrity clout that most people look up to, and to just say that strip clubs are sex trafficking is wrong and gives the wrong impression. Sex is a good thing, yes, like all things in life, it could be used for evil, not saying that, what I am saying is, their are positive things that comes with Sex working and one should have a more open mind than just degrading it.

According to complex, Kanye went on another tirade about alcohol, which is fine with me, I'm on the fence with it. I do believe alcohol is bad thing but only when people abuse it. Again, I think that's the whole point to my blog post. It's under the person's volition and you can't condemned a whole thing just because Mr. West doesn't like it. Which I find amusing since the man that he supports also supports Sex Workers, he just doesn't like it when they tell all to the public. Come to think of it, I guess I can agree with Mr. Trump on that one. I would hate it to if I paid a pornstar to fuck me and then paid again to be quiet, and then she blabbed to the media.

And I think I found my home until I can purchase a burner phone to use twitter, but we will see what happens with Mastodon. I hope to resolve my issues with Gab but I think I'm just going to leave them for this platform. They are an open source platform so that's good news for me. I just wish it had the audience that Twitter has but with Twitter wanting your personal information, I have no choice but NOT to use them. Still, to be continued... Stay Golden, Misborn ...
Read more...

So a rapper who is white won best rap album

You have to excuse me, I checked out on rap music, well, music in general since the early 2000's. If you didn't have a rap album out by then I don't know who you are and I have no idea about this white rapper that goes by Post Malone. I went on the Youtubes and checked him out. Not my cup of tea, none of these "new" rappers speak to me, sure; they have nice beats and they seem to enjoy singing more than coming up with complex lyrics, singing will push them more into the pop category. This mean...
Read more...
Thankful
November 29, 2019
I have been blocked from Gab
November 24, 2019
Why do you need a phone number to sign up to social media platforms?
November 21, 2019
Hello! Testing...
November 20, 2019