If you feel like a minority and your voice is not being heard. If you are passionate about something you believe is wrong that is unfolding before your eyes, is that no the time to shout about it. If your views are being ridiculed and labeled conspiracies and you

If now is not the time then when?

Think about that for a second. Here is a small piece of cyberspace with nothing but words. Words typed into a computer by a human with several decades of live on planet earth. A Human that wants to express their view and have a voice. An anonymous human as for the first time in their life is too afraid to speak out with their views as they do not go with the governments words. This will soon be a crime, and in many countries it already is.

The author lives in a democracy call the UK. Has been publicly vocal on some pretty divisive topics such as Brexit. Publicly showed dissent against the government. Not today. For fear of basic career suicide I have largely remained quiet. Yet today we are seeing a fundamental change to our freedoms, and yet the author choses to remain anonymous posting under a pseudonym.

The author needs to do more

I don't know what that is right now. I see our freedom of speech and right to privacy eroding every day. I would in the past be happy to "insta" and share pics of my food with the world, yet something fundamentally important to me as a human is being lost and I remain quite. The big platforms are censoring. They are being pressured by governments to do more. Society welcomes this censorship.

Take a second to think.

Just stop. Put your phone down for one second and engage your brain. These are new laws passed through government. No debate.

I don't get why people are cheering this "New Normal". Turn away for a second and the UK has become North Korea.

Here's a scene from a Nazi rally in 1934. Why didn't anyone in the crowd question the narrative? I can't believe everyone in the crowd that day were evil, or that they would image in 1939 the world went to war to try and crush one of the most evil people the world has seen. 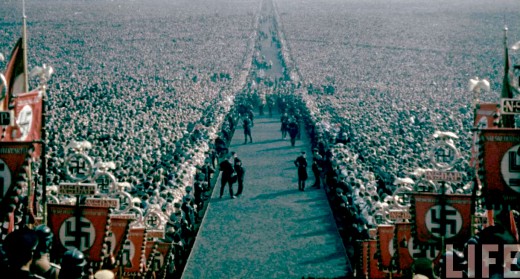 That's propaganda for you. Most people in the UK will say "Oh that could never happen in the UK we have a history of being the good guys" - "Boris would never do that I've seen him on TV he seems nice". Well I'm sure the citizens of West Germany were thinking exactly the same thing.

Well it could. It is right now. Make no mistake

Stand up. If not now, then when?

Right vs Left - Divide and Conquer Politics is the new religion of the west. It's so divisive it blows my mind. Left Vs Right. It's how many people identify their entire existence. It's how they define the enemy. It's how they call out people they hate. It's absolutely bonkers. I'm sure if someone interviewed my philosophy they would uncover many right wing views of less government control and deregulation, but paradoxically believe access to good healthcare is a fundamental right of all citiz...
Read post

Talk about moving the goal posts. This is how the narrative went: This is no threat carry on We need herd immunity Protect the NHS by flattening the curve R0 value needs to be ? ""Keeping the R down is going to be absolutely vital to our recovery. And we can only do it by our collective discipline and working together." - Boris What a load of tosh. They are literally just throwing new excuses to keep us locked in our homes. People are waking up to the fact that the mortality rate is jus...
Read post