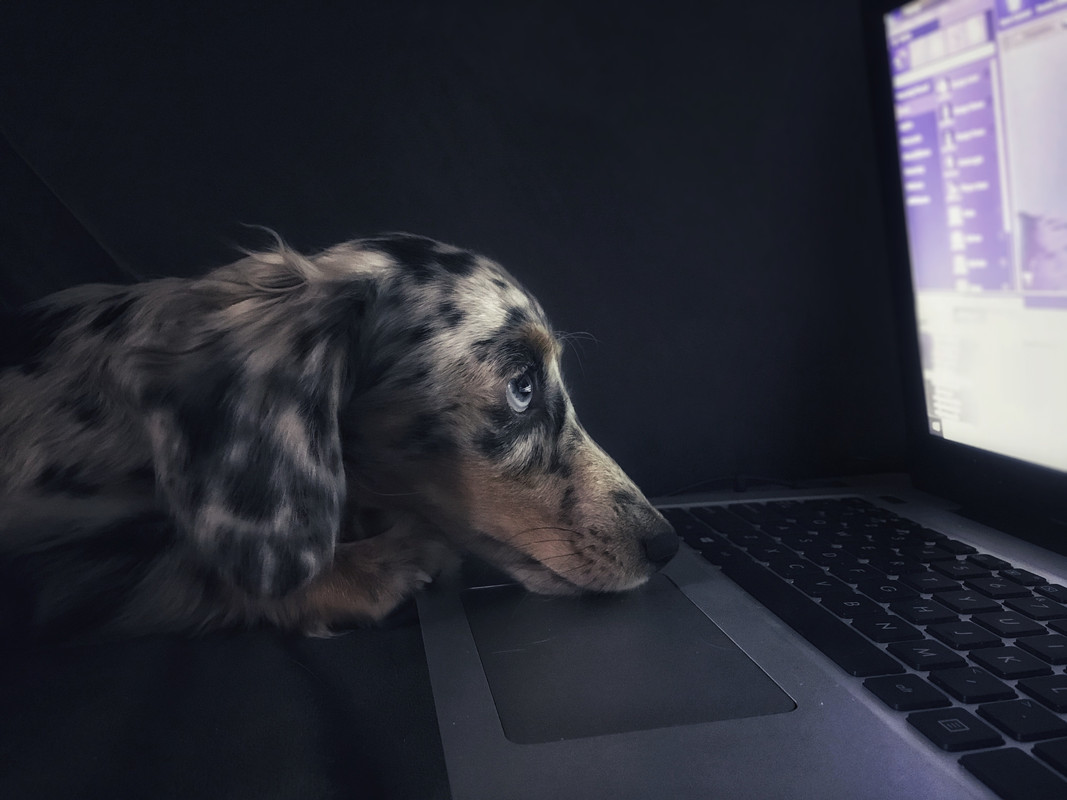 Photo by Kyle Hanson on Unsplash

While a part of me wanted to just lay around all day, without a care in the world while I rested and healed, I just couldn't do that. Perhaps another post at another time about my internal feud between wanting to do nothing for hours or days on end, and my inability to actually do so.

But, in this case, I adjusted my schedule, and somehow still maximized my time while resting and recovering. The best thing about being on leave was that I didn't have to wake up to an alarm. In fact, that's one of the things I really look forward to when being a freelancer again. Now, that doesn't mean I never have to get up early for something, or that not waking up to an alarm would mean that I sleep until Noon everyday.

However, being that I was on some pretty strong medication, I would sleep for long hours at a time. But, that also meant that I'd stay up a little later than if I was going to work every day as well. So, while I'd probably go to bed around 11pm or midnight, due to the medications, I'd wake up around 10am.

I'd have a routine where I'd get showered and dressed, make my coffee, and then head upstairs to my office. From there I'd put on some music and start learning. I'd be at the computer all day. Whether in my office or on my laptop around the house, I was always on the computer. Not playing video games, and not wasting any part of my day on social media. I was learning about Linux and FreeBSD. I was addicted, actually.

I'd been a Microsoft guy almost all my life. Sure, I dabbled in Linux around 2008 and even built a little media streaming server for my home network. But, I was just following the instructions that others would share, without really knowing why certain commands were being entered, or why certain settings needed to be made. So, this time, I went all in on Linux and FreeBSD. I converted my desktop computer to Linux, with no Windows partition or dual booting at all. Just Linux, and a few different distributions with different desktop environments as well.

And, if an install went smoothly to where I didn't need to troubleshoot anything, I'd give myself a project of the day. Whether it was creating a storage volume consisting of multiple external drives and utilizing a fault-tolerant file system, to installing Plex server on an ultra small form factor PC that was turned into a multi-purpose server. Sometimes my project of the day would turn into the project of the week, or the only thing I could finish that entire weekend.

Diving in and going past the surface was refreshing. I also supplemented my hands-on experience with watching YouTube videos.

If a particular feature or function, or a new distribution would interest me, I'd watch several YouTube videos about all of it. With each video I'd watch, and with each project I'd give myself, I'd get more and more comfortable with the Linux operating system, and even it's various distributions. I'd tried OpenSUSE Tumbleweed, Manjaro with different desktop environments, Antergos, BunsenLabs Crunchbang, etc.

I even bought a cheap Chromebook for under $50 and turned that into a lightweight Linux laptop.

When it came to FreeBSD, I was at first intimidated that it was Unix-like, just like Linux and MacOS are, but that it was for some reason more complex and complicated. After working with it, it's actually the opposite. It's organized, consistent, very stable, and most of all, everything is done the same way. While there are different flavors of BSD like OpenBSD, NetBSD, and DragonflyBSD, there are even a couple of preconfigured desktop versions of FreeBSD. But, if you're using something that's actually FreeBSD, or based on FreeBSD, all commands and configs are the same.

Same with OpenBSD, and any of the other deriviateives. Even if they are somewhat different from each other in terms of features, commands, and what you'd configure to get something done, they're the same for that flavor. Whereas Linux tends to be 'modified to taste', even respins of mainline distributions like Debian or Arch tend to have commands and ways of doing things that are different from their parent distribution.

So, I decided to take an HP thin client I'd bought a couple years ago with a dual core AMD processor and 4GB of RAM and turn it into a FreeBSD desktop machine. At first, I tried to install a pre-configured desktop version of FreeBSD called GhostBSD, but it wouldn't load the system files for installation.

Then I tried TrueOS, which used to be called PCBSD... it wouldn't load, either. So, I went for it. I booted from the plain vanilla FreeBSD server edition, and was able to get to the config utility. I had to look up several how-to's to get it going, but thankfully FreeBSD is well documented, and using FreeBSD as a custom-built desktop/laptop is hardly a new idea. So, there was plenty of info to Google.

I was trucking along, everything for the base install loading up great... smooth as buttah. Then came time to try to get the video to load. Stopped me cold. Nothing I tried from any of the official wiki or even the been-there-done-that tutorials online could get me past the inability to load the basic video server and driver. Frustrating to say the least.

After all I'd accomplished with Linux, and getting over 90% of the way with FreeBSD, the damn video configurations were getting the better of me. So, rather than stress out (which I was recovering from to begin with), I stepped away. I went and watched some TV and just cleared my head, and went to bed later on.

The next morning I made myself a deal. I said to myself, "Self! You've got three options today. One, you can forget about messing with that computer, and just put it back on the shelf and do something else. To which, the computer won. Two, you can decide to work on it until you figure it out, no matter how long it takes. Hours, days, even weeks, you can decide right now to just DO IT and not stop until it is. To which you don't really win, but you don't let the computer win, and you drive yourself to madness not knowing how long it'll actually take until you finally solve this puzzle. Or, three, you can stop being so hard on yourself, agree to work on it for just one hour today, and if you don't get it working, put it away and face these same three decisions tomorrow but then spend the rest of the day today doing something really fun."

Care to guess which one I chose? Normally I'd choose option two, because I hate letting anything beat me. Especially a computer. And while I usually end up solving whatever it is eventually, it's usually at the cost of frustration, anger, and being past the point of enjoying the win itself. But, this time I decided to try something different. I chose option three.

Just selecting something both different and rational already had me looking forward to the day and not dreading it. So, I did my morning routine, got my coffee and went to my office. No misgivings, no anger or frustration, just the excitement to see what I can actually achieve in one hour's time. If I solved it, great! I can keep moving forward. If I didn't solve it in the hour, great! I'll do something else awesome with my time, and make another decision about it tomorrow.

The results surprised even me, someone who has seen his fair share of personal breakthroughs and pushing past my own perceived limits. Within TEN minutes, I had it solved. Ten freakin' minutes! I was stoked... like really stoked. It seems that if I stop putting so much pressure on myself to succeed, to win, to never give up no matter what, I can do more with less guilt and anger.

My spirit and my drive have always been defining qualities for me throughout my life. The never quit, never surrender type mindset served me well for a very long time. But, when I found myself having to take time off work to mend my soul and my spirit, I realized that not finishing, not being smart enough to fix something, or just not having the interest anymore to do something isn't the end of the world. And, it's certainly not the end of me.

And instead of actually quitting, or stopping or giving up, but simply giving myself a choice, which I've never really done before, I chose to do my best, instead of requiring myself to give it my all or else. As such, I chose to try it, and I resolved it in less time than if I put myself under pressure to do it, and I felt SO much better when I actually accomplished it.

So, when it comes to this "achievement", it wasn't just about learning new operating systems, thought I have certainly done that (with so much more to still learn). It was about learning to give myself an option to not always have to be awesome. To decide to try without a requirement to succeed, to allow myself to possibly fail, and to be ok with any of the possible outcomes.

When I went back to work, I had a whole new perspective of ME, and that's probably my biggest achievement so far in my entire life.

Photo by Jesus Kiteque on Unsplash When I was on medical leave late last year and early this year, I set out to achieve a couple of things, despite the fact I was unable to work. One of them was to learn more about minimalism and see if it would be something I could embrace. Turns out, it's both fascinating and refreshing for me at the same time. I watched a documentary on minimalism on Amazon Prime aptly titled, "Minimalism". It's the story of two podcaster and YouTube stars, Joshua Fields-...
Read post

Winning the Day Before It's Even Started

Photo by Fauzan Saari on Unsplash Today was a damn good day, and somehow I knew it was going to be, even before I got to work this morning. Have you ever had one of those times where a thought of something you really wanted pops into your head, then some time later it just appears? Whether that thing is something you buy, something you want to attain or achieve, or someone you want to notice you, it doesn't really matter. And the some time later part can be a day, a week, or even sometimes y...
Read post